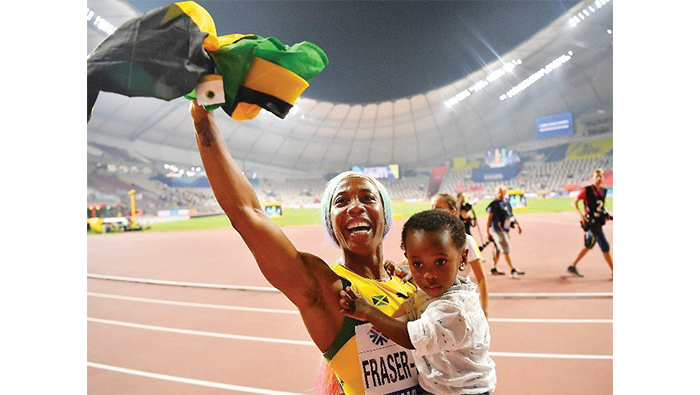 Tokyo: The Olympic Games is never short of thrilling scenes of athletes contending for glory, but warmhearted moments as well, including some athletes continuing their Olympic quest after returning from giving birth.

With the Tokyo 2020 Games underway, several mother-athletes are striving for excellence on the Olympic stage and becoming inspirations to billions of sports fans across the world.

Wu Jingyu
(China, taekwondo)
The two-time Olympic taekwondo gold medalist could not progress through the repechage in her fourth Olympic appearance on Saturday, but won respect from many fans, including the IOC president Thomas Bach.
Wu turns 34 in July. After finishing seventh at Rio 2016, she retired before giving birth to a daughter in 2017 and making a surprising return to her beloved sport half a year later.
“The first two months after my return was quite tough. My body felt like falling apart and even running was pretty difficult for me, let alone high kicks,” Wu recalled in an interview in 2020.
A teary-eyed Wu, told reporters after Saturday’s event, “I can accept my retirement in such circumstances.”
She also shared some words for her daughter. “Mom and dad always love you. Life is in your own hands. We hope you dare to do whatever you want.”

Liu Hong (China, athletics)
Liu is no stranger to Wu’s experience, as she herself is also going through a journey of coming back to the race walking track as a mother of a three-year-old girl.
Liu, now 34, had planned to retire after the Tokyo Olympics, but the postponement of the Games in March last year put her in a dilemma because she was not sure if she could hold on for one more year.
However, a resilient Liu has proved that she can.
In March, Liu bettered the 20km race walk world record she set back in 2015 along with younger teammate Yang Jiayu.
“Now I take Tokyo 2020 as something at a certain stage without thinking too much about the future,” she said.

Alex Morgan
(United States, football)
Morgan, 32, is competing in her third Olympic Games and first as a mother. She welcomed her daughter Charlie with her husband Servando Carrasco in May 2020.

“I’m going to miss my baby girl so much this month. Charlie girl, I’ll make it worth it!” Morgan wrote on social media before departing for Tokyo.

“I feel physically stronger and fitter than before I was pregnant. I do feel a change in my body, and it’s a change for the better,” she told FIFA’s official website.

Allyson Felix
(United States, athletics)
Felix is set to appear at her fifth Olympic Games in Tokyo. The nine-time Olympic medalist could break or tie Carl Lewis’ record of 10 medals to become the most decorated American track and field athlete in history.

Felix welcomed her daughter Camryn in November 2018. She hopes that returning to the Olympics as a mother will prove that women can continue to break records in sports after having children.

“I want things to look different for those coming after me and so that means really pushing on certain issues and really standing up for ourselves,” she said.

“I am thinking about being the greatest mother, I can be with my biggest blessing and the promise God made me,” Fraser-Pryce wrote on social media.

As for Tokyo 2020, Fraser-Pryce said she is looking forward to standing on the podium in 100m and 200m events.

Olufunke Oshonaike
(Nigeria, table tennis)
Oshonaike made history by becoming the first African woman to compete at seven Olympics, as well as the first female paddler to join the exclusive “Club of Seven”.

“I’m the happiest woman in the world today, I still can’t believe it. It feels as if I’m still dreaming,” said the mother of two after securing her ticket to Tokyo 2020.

The 46-year-old Nigerian saw her Tokyo Olympics campaign end after losing to Liu Juan of the United States in Saturday’s preliminary round.

Oksana Chusovitina
(Uzbekistan, gymnastics)
Chusovitina’s eight Olympic experiences started in 1992 when she competed on behalf of the Unified Team of the former Soviet Union, then representing Uzbekistan, before switching to German citizenship in 2006, and finally restoring her Uzbek citizenship in 2013.

When Chusovitina’s three-year-old son was diagnosed with leukemia in 2002, she sold her possessions and competed frantically in the hope that the prize money would pay for his medical treatment.

She took German citizenship to compete in various world events for a higher income and better medical care. She brought Germany a silver medal in the women’s vault at the 2008 Beijing Olympics when she was 33. Her story of “I dare not grow old until you are well” has touched countless people.

After her son’s recovery, Chusovitina continued to compete, but this time it was the love for gymnastics that kept her going. At the age of 46, Chusovitina competed against gymnasts of her son’s age at Tokyo 2020.

After leaving the arena in Tokyo to a standing ovation from her rivals, Chusovitina said: “I cried tears of happiness because so many people have supported me for a long time.

“I’m alive. I’m happy. I’m here without any injuries, and I can stand on my own!”

After Rio 2016, Chusovitina received a message from her son. “He said he was proud of me,” said Chusovitina.

Alisher, you must be even more proud of your mother this time in Tokyo.