Will all the euphoria and attention translate to better pay for players? 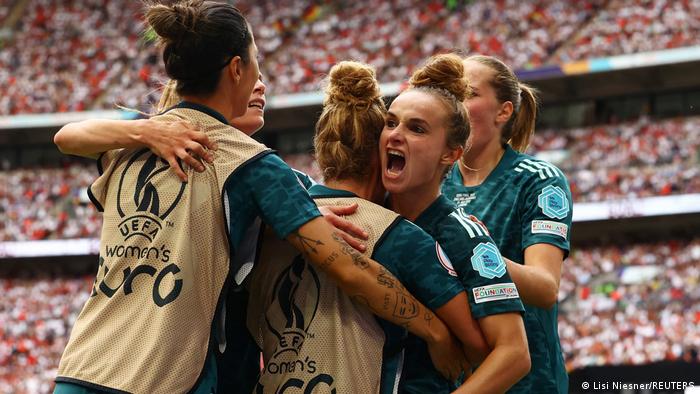 In the public discourse of recent weeks in Germany, three core demands have emerged:


"We players in the second division upwards should be able to earn enough money from football so that we don't have to hold down outside jobs," Lina Magull, scorer of Germany's only goal in Sunday's final said recently.

Magull stressed that this doesn't mean earning millions as some players in the men's game do, but at the same time she pointed to examples in other European countries.

"In England, clubs are required to pay their players professionally to be allowed to play in the league. I don't know why that can't happen in Germany," she said.

In 2019 the players of the Primera Division de la Liga de Futbol Femenino reached an agreement with the league that stipulates a minimum annual wage of €16,000, as well as maternity benefits. Previously, 49% of the players in Spain's first division received no salary whatsoever, and 31% earned less than €6,000 per year.

After Euro 2022, Germany coach Martina Voss-Tecklenburg also called for a minimum salary for female German professional players, "because almost 50% of players in the Bundesliga still work on the side because they can't live on what they earn from football."

An Internet petition addressed to German Football Association (DFB) President Bernd Neuendorf calling for a minimum wage of €3,000 per month in the Bundesliga had been signed by more than 17,000 people by August 2.


The Euro 2022 final between England and Germany was watched by around 18 million people on German public television, more than ever before for a women's football match in the country.

"The successful European Championship helps the visibility and presence of women in football enormously," the DFB's manager of marketing, Holger Blask, told the DPA news agency.

"The record ratings show that the interest is there."

But does this translate to the Bundesliga?

Last season, all Bundesliga matches were broadcast live in Germany for the first time, but only on a domestic Pay TV channel. The contract runs until mid-2023, by which time the free-to-air channel Eurosport is to broadcast one Friday match per matchday.

In the United Kingdom, women's games broadcast on Sky Sports reached an average of 125,000 viewers last season, and this number is climbing.


Former Germany coach Hrubesch points to grass-roots problems that still urgently need to be addressed, noting that in terms of training facilities and kickoff times there are "still problems offering the girls a really professional standard."

Current national team coach Voss-Tecklenburg stresses that, "we have to do more, to get into the big stadiums."

Germany player Svenja Huth would like to see "all clubs to having a good infrastructure and medical support."

So far, this has generally only been the case with women's teams affiliated with men's Bundesliga clubs – such as last season's top three, Wolfsburg, Bayern Munich and Eintracht Frankfurt. The two teams that were relegated, SC Sand and Carl-Zeiss Jena, don't have the financial backing of a men's Bundesliga outfit.

Whether moving to larger stadiums would translate into a higher number of spectators in the Bundesliga in the long term remains to be seen. So far, this has been the rare exception, like when Wolfsburg played Barcelona in the Champions League in April. That game saw 91,648 viewers attend.

The upcoming Bundesliga season opens on September 16 when Eintracht Frankfurt host Bayern Munich in the 51,500-capacity Deutsche Bank Park. Eintracht averaged 1,580 spectators per game last season. That is almost double the league's average. Still, it is clear that here too, there is still plenty of room for improvement.