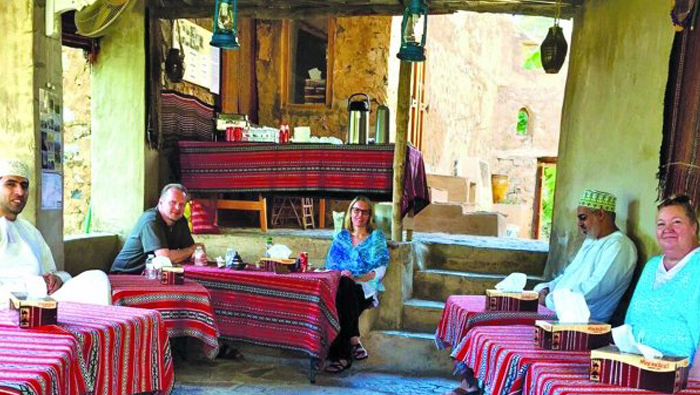 Muscat: Villagers are opening their homes to tourists visiting Al Hoota caves in a partnership project to create an authentic Omani experience.
After their successful first venture ‘Misfah Old House’ near Nizwa, where they renovated an old Omani house to create a guesthouse, Ahmed and Husni Al Abri, are now operating a restaurant and gift shop at Al Hoota cave.
**media[492876]**
The first venture, Misfah Old House, is located in the same area and is also thriving, especially in the winter months when the tourist season is high. “It’s one house with 12 rooms in it, and our rate is roughly OMR30 per night, including three meals.
“It’s normally fully booked, and our tourists mostly come from Europe, but we also have a few locals coming in who want an authentic Omani experience,” Husni added.
All rooms in the guesthouse are fitted with tiled floors and have large windows. Each room offers mattresses, blankets and pillows. Guided tours within the village and to surrounding areas can be arranged by local Omani guides. Also, adventure activities can be arranged, as requested.
**media[492739]**
“We heard about the opportunity of the Cave re-opening and approached Omran with a proposal to operate and manage the restaurant and gift shop at Al Hoota complex. We have much experience with tourists and the hospitality industry, because of operating Misfah Old House for a few years now, so Omran gave us the chance to operate Al Hoota Cave,” as well.
“Our proposal to Omran was to involve the local community as suppliers and, because we belong to the same community, we would be able to easily find local suppliers. This creates good in-country value for Al Hoota Cave.
“At the gift shop, we have collaborated with the Omani Women’s Association in Al Hamra and the handicraft sellers in Jebel Shams, who lack places to display and sell their products. We are now selling their products for them at Al Hoota Cave,” added Husni.
**media[492877]**
Also, suppliers selling dates and honey have contacted the two Omanis, “We just started, and lots of suppliers are coming to us who have special dates from Al Hamra with nice packaging,and also honey. So, in the future we are planning to involve all of these suppliers and create a brand with the support of Omran, as they have a lot of experience and can guide us well,” Husni added.
“At the restaurant, we are buying only local produce from suppliers in the area, and are trying to maximise the supply from the village.
“The restaurant opened for business yesterday, and will feature a corner for authentic Omani food, but will also include international cuisine, fresh juices and light snacks.
“We will also introduce some special Omani juices, date juice, special lemon juice and other surprises in our menu later on. We will offer special meals on the menu during Eid, and also for other special events.”
“We have our chefs, but we are also involving chefs from the area to prepare food, as well, such as for the opening event we received coffee made from a person who is specialising in making coffee in the area, and the Halwa was from Nizwa.”
The gift shop currently employs an Omani and two expats,while the restaurant employs three Omanis and six expatriates.
A spokesman for Omran said they would welcome any approach from other villagers who would like to open their doors to tourists visiting the Sultanate to see the caves.